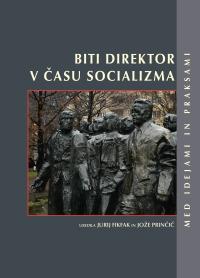 
This book ('Company Directors under Communism. Between Ideas and Practice') is the result of a study of archival and other documentary material and interviews with prominent Slovenian company directors from pre-1991 Yugoslavia. It presents the basic structural characteristics and configurations of the communist socioeconomic system in which, despite ideological obstacles, Slovenian entrepreneurship and company directors developed after 1960.

Jože Prinčič offers historical insight into these events. In “A View into the History of Slovenian Entrepreneurship” he discusses the formation and shaping of entrepreneurship in Slovenian ethnic territory from its first beginnings in the second half of the nineteenth century to the independence of Slovenia in 1991. He focuses on the period between 1945 and 1991. The article “The Function of Company Directors in the Yugoslav Communist Economic System” states that this was always a subject of contention and discussion typical of a system in which politics governed the economy. In his article “The Path to Becoming a Successful Company Director,” Prinčič highlights the structural and other conditions and circumstances that an individual had to deal with in order to become a successful company director. In his article “The Biggest and Most Successful Slovenian Companies in the Second Half of the Twentieth Century,” Prinčič presents some of the most important Slovenian companies that were also successful after the collapse of the communist system.
In the introductory article “Slovenian and International Research on Entrepreneurship,” Jurij Fikfak examines both a suitable approach and the selection of qualitative methodology. The relationship between economics, politics, and the social system is discussed in the article “The Company Director between Ideas and Practice,” in which he determines that there was a large degree of pragmatism in company directors’ viewpoints. Narrative and expert interviews form the basis for the article “Company Directors under Communism.”
Jeffrey D. Turk’s article “Why Are Company Directors’ Stories Important?” examines the need for qualitative research. In the article “Slovenian Company Directors as Seekers between the Home Environment and Outside World,” he analyzes the relationship between company directors and the outside world, especially the West.
Tatiana Bajuk Senčar’s article “Company Directors and Social Networks” determines that the social networks that included company directors, Communist Party secretaries, and so on were a constitutive element in staffing, in providing funding to companies, and in their business operations. “Directors and Multi-Layered Identity” examines the special identities and positions that company directors held.

Jurij Fikfak, Jože Prinčič, Jeffrey D. Turk, and Tatiana Bajuk Senčar, To be a director in the time of socialism. Between ideas and practice