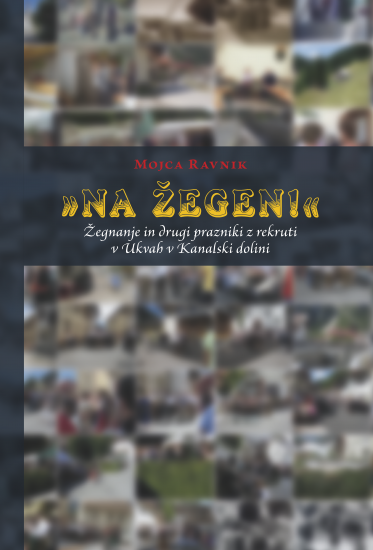 
“Come to Žegen!” Patron Saint's Day and other Feasts with Conscripts in the Village of Ukve in Val Canale

The Village of Ukve/Ugovizza is situated in Val Canale in Northeastern Italy, a valley near the intersection of borders of Austria, Italy, and Slovenia, and at the historical junction of Germanic, Romance, and Slavic language areas. Until WWI it was a part of the Austro-Hungarian Empire but was later annexed to Italy. Although Italian is the prevailing language now many Slovene, German, and Friulian inhabitants are multilingual and have preserved their ability for mutual understanding. Slovene language has been best preserved in Ukve.

The book discusses festivities that take place on the local Patron Saint's Day, and on Christmas and New Year period. The text focuses in particular on the village’s Patron Saint's Day, the so-called žegen, which is celebrated on the day of St. Jacob or on the Sunday nearest to it.

After the general presentation of history, settlement, ethnic structure, and languages spoken by the inhabitants of Val Canale , the text focuses on distinctive economic and cultural features of the village of Ukve. It examines preparations for the feast, festive dishes, clothing, and certain forms of entertainment - such as dance, concerts, games, etc. - which are organized on the days before the feast and have been recently added to the festivities. On Sunday, the celebration begins with a solemn mass in the morning. It is followed by singing and dancing, and then with a procession through the village. The procession is led by conscripts and their female peers and musicians, who make a stop at each of the village inns, where they sing, dance, and drink wine. The festivities conclude in the evening with the final dance and music.

The author presents the žegen as the feast of the community, family, and neihgborhood. For the village youth it denotes the confirmation of their maturity within the village community. The feast is also shown as a manifestation of a deep-set and still-practiced tradition of folk, choir, and church singing, and an opportunity for its transmission to younger generations.

Conscripts play the main role also at the end of the year. Before Cristmas they place the Christmas tree in the middle of the village, and on the eve of the Innocents' Day they visit each house in the village, singing carols and wishing a Happy New Year to its occupants.

The author concludes that singing and music, participation of villagers of all generations, and a strong commitment of village youth are the most prominent characteristics of the žegen, Christmas, and New Year feasts in Ukve. Finally, and for comparison, she also briefly presents the žegen in the nearby village of Žabnice.