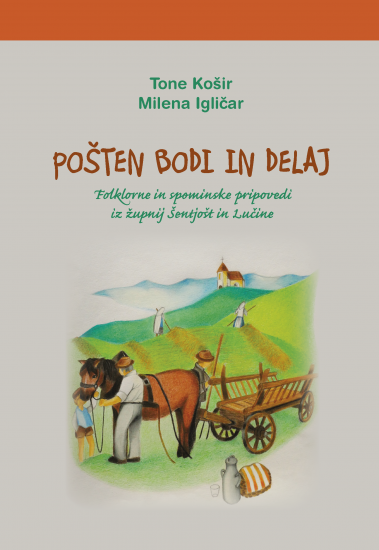 
The 53rd book in the Glasovi collection contains 434 tales from the neighbouring parishes of Šentjošt nad Horjulom and Lučine, which number approximately 1,400 inhabitants altogether. At the juncture of both parishes lies the hamlet of Suhi Dol, where we gathered more than 300 folklore and ethnological units, whose content concerns both parishes. This was the motivating factor behind the decision to publish a special book in the Glasovi collection, though it seems that in doing so we are trying to unite the incompatible, since Šentjošt nad Horjulom has always been part of the Vrhnika/Polhov Gradec region, as opposed to Lučine, which has always been part of the Poljane/Škofja Loka region. They share similar geographical features and farming as a means of survival. People in these parishes also speak the Poljane dialect, which is a part of the Rovte Dialect Group. In its vernacular, the Lučine region was influenced by its thousand-year affiliation with the Škofja Loka Dominion based in Bavaria, and there are accordingly more German loanwords than in the Šentjošt region.

The content of the tales and other narratives shows how hard life and work were for people of all walks of life who did not close the door to the poor and to beggars. They were always given a piece of bread, even there was never an abundance of it. Contact with special characters, the poor, and peddlers is also reflected in many narratives associated with them, many of which are anecdotes and humorous tales.

World War II with its occupation and the communist revolution affected both parishes. In the Šentjošt parish, people were particularly affected by an actual androcide, and in May 1945 by the exodus of entire families to Carinthia and later to Argentina and the USA. In the Lučine region, the casualties were somewhat lesser. After World War II, people in these villages and towns were oppressed by numerous bans and an obligatory tithe on crops and produce. Those conditions were also reflected in the narratives gathered in the book’s historical chapter.

Most of the stories are written in dialect, and only under a tenth are written in the standard Slovene. The first records were made before 1955, and most of them from 1970 through 2000. The planned gathering is a newer phenomenon, one that has been held from 2014 until 2019. During this time, 100 tales by narrators Matevž and Slavka Košir were recorded and transcribed in accordance with the instructions of a dialectologist. Nearly 40 folklore forms and poems are published in the first section of each of the chapters, contributed by 11 narrators.

The illustrations are the work of diligent artists, all of them somehow linked to Suhi Dol.

The tales are divided into ten chapters, none of them being a fairy tale. Among them, there are 7 myths, 15 superstitious tales, 24 scary tales, 50 legends, 21 explanatory tales, 95 historical tales, 49 social tales, 76 ethnological tales, 71 anecdotes and 18 humorous tales.