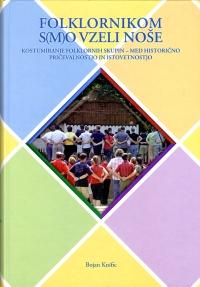 
'Members of the folk-dance groups have taken costumes. Costuming of folk-dance groups: demonstrating identity under the pretence of historical witness'.
During performances that recreate older style folk dancing, folk-dance groups interpret clothing heritage through folkloric costumes that, due to their tendency to portray dress from historic dance events, are increasingly moving away from the phenomenon of affiliated costuming, although in no way can they separate themselves from it entirely. Language and literature have played a crucial role in the formation of the Slovenian national identity and my intention is not to disprove their significance as a basic identifying element of the nation, but to shed light on a smaller but nevertheless fundamentally recognizable element that assists in forming the development of ethnic and national identity. At issue is the question of dress that is always related to identity and more specifically, the question of costuming folk-dance groups, which is more frequently and more explicitly than we sometimes hope to acknowledge, intertwined with affiliated costuming. In spite of prevailing ideologies and general norms, dress, like other symbol systems, is subject to the manipulation of individuals or social groups.

price
not for sale